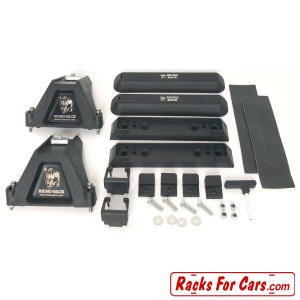 Orders over $139 qualify for free shipping across Canada or choose free curbside pickup in Edmonton.

The Rhino-Rack RFMC Fixed Mount Canopy Leg Kit is a set of two legs designed to mount into a fixed position on the top of your fiberglass canopy. The RFMC Leg Kit is combined with a Rhino-Rack Heavy Duty Bar to create a one bar system that mounts onto the top of your canopy. If you would like to mount two bars on your canopy you will need two sets of the RFMC and two Heavy Duty Bars.

The Rhino-Rack Fixed Mount Leg Kit features a base which can swivel to allow a better fit to a wider variety of vehicles roofs. Additionally, its high profile design is ideal for highly curved roofs or when the extra height is required to level out multiple bars.

The RFMC also comes with the GE backing plate which covers up the mounting hardware on the under side to give the inside of your canopy a neat and tidy look.
The Rhino-Rack offers you compatibility with a wide selection of accessories; so whether you’re a trades person, traveler, cyclist or surfer, the Heavy Duty RFMC roof rack system has you covered.