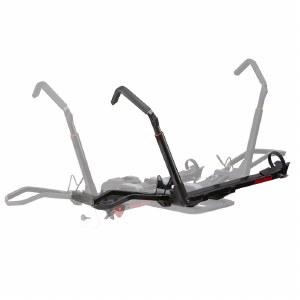 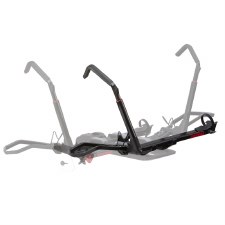 Qualifies for Free Shipping across Canada. In store pick up is always free.

The Yakima EZ+1 is a third bike add-on for the Yakima DrTray platform bike rack. It easily pops on and off at the rearmost position of the DrTray's spine. The EZ+1 has an elevated stand-off base to push the bike further back and away from the other bikes, improving clearance. The DrTray's rear tilt lever remain accessible below the EZ+1.

Like the DrTray, the EZ+1 can carry road bikes, mountain bikes, and fat bikes with wheels up to 5" wide. The maximum bike weight per tray remains 40 lbs / 18.1 kg.

The base of the EZ+1 sits up and back from the rearmost position on the DrTray's spine. This lifts the bike higher than the middle bike and keeps the excellent bike-to-bike spacing of the DrTray.

The rear tilt lever on the DrTray's base remains accessible under the EZ+1's third bike. The entire 3 bike system is able to fold down away from the vehicle to let you into your rear hatch with bikes loaded.

An SKS (Same Key System) cable lock system on the EZ+1 secures the bikes by the wheels and frame to help prevent theft. The DrTray base rack is already locked to your vehicle using its locking SpeedKnob attachment system, giving you a full security system.