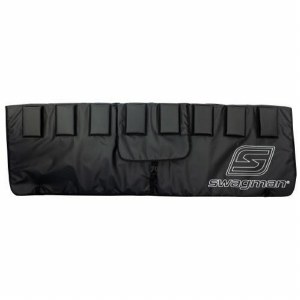 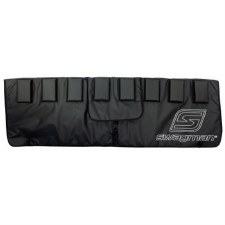 The Swagman Paramount Large is our newest addition to the Tailgate Pad lineup. It is designed to be the best tailgate pad in the business. It's a quick, easy, and safe solution for hauling up to 7 bikes in the back of your midsize pickup, depending on their size!

This rugged tailgate pad constructed of high density foam covered with tarpaulin protects your bikes from damage while being an economical and easy way to transport your bikes to the trailhead. The PARAMOUNT has stanchion pads spaced along the outside of the pad to allow you to slot the forks into to prevent the bike from flopping over into the bike next to it, prevent unnecessary tune-ups. Across the top of the tailgate a series of straps sewn to the pad with moveable Velcro lash straps to allow you to wrap the Velcro straps around your down-tubes of the bike frame to secure your bike to the pad.

The PARAMOUNT also includes a fuzzy fleece liner against the painted surface of your tailgate to reduce the likelihood of scratching.

The PARAMOUNT also includes an oversized latch-access flap to allow easy access to release your tailgate no matter what make of truck you have. This access flap has a clip on it to allow it to be clipped in either an open position to allow for use of a backup camera or closed when carrying the maximum number of bikes. And that’s not all…the PARAMOUNT also has mesh bags sewn to the pad inside the truck bed that can be used to store your helmets, protective gear and other stinky gear you don’t want inside the truck on the drive home!